How far will a people go to raise money for sick kids? If those people are the world renowned LoadingReadyRun comedy troupe, that distance is from Las Vegas to Tucson and back until people stop paying them.
Please stop by their website http://desertbus.org and make a donation to a good cause.

GAMING FOR THE GREATER GOOD

On November 19th, the fourth annual Desert Bus for Hope charity video game marathon will roll out – bigger and better than ever before. Last year’s marathon collected more than $140,000 over six days, and all proceeds were donated to Child’s Play, a charity that donates over a million dollars to Children’s Hospitals worldwide every year, including Vancouver Children’s Hospital and Victoria General Hospital’s Pediatrics Ward.

Desert Bus for Hope is a video-gaming marathon broadcast live on the internet by LoadingReadyRun, a sketch comedy group from Victoria, BC. In the Sega CD game “Desert Bus”, the player controls a virtual bus that drives an eight-hour-long strip of highway between Tucson, Arizona, and Las Vegas, Nevada, on an endless loop. The game is a “verisimulator”—a tongue-in-cheek parody of other simulation games—which attempts to approximate the real-life situation of driving a coach bus as closely as possible, including the associated tedium. The player is required only to ensure that the bus stays on the road: if they crash, they are towed back to the start and have to try again. Originally part of “Penn & Teller’s Smoke and Mirrors”, Desert Bus is considered by many to be the most boring video game ever created.

Viewers are asked to donate money via the desertbus.org website, and as the dollar total rises, so does the length of time the team must continue driving the bus. According to Paul Saunders, one of the founding members of LoadingReadyRun, “The mixture of generosity and spite is a really powerful thing.” Viewers are encouraged to participate by e-mail or by live internet chat, where they can ask questions of the crew, make requests, bid on donated prizes and become an active participant. To view the telethon, donate money, or find more information, please visit www.desertbus.org.

LoadingReadyRun is an online sketch-comedy group based out of Victoria, BC. They produce a new short film every week, which can be viewed on their website, www.loadingreadyrun.com.

Posted by Unknown at 5:09 PM No comments:

Its been a while since I posted my first blog about Fantasy Football. In the first 10 weeks of the season I seem to have figured out something. I am 9-1 so far. Its been interesting and I have definitely watched more football this year than I have since I worked at Radio Shack and had the games on every weekend.

I highly recommend getting into some kind of Fantasy Football League with friends. Even if you don't have a lot of knowledge of football its a great way to learn more.
Posted by Unknown at 4:43 PM No comments:

Some of my friends over at the Audiobuzzed Podcast have had a Fantasy Football League for a couple years and this year I have joined them. While I may have participated in a few football pools in the past (to amazing failure) I have never participated in a Fantasy Football League before. I have never been someone that pays much attention to statistics in football. Every time I would try to use the numbers to predict the winner of a game it never worked out. I did far better either picking alphabetically or based on the match-up of the mascots.

I'm actually excited about football season this year now. When I was a kid I loved to watch the 49er's play every week. It was the height of the Joe Montana years and the start of the Steve Young years. How could you not love to watch the amazing action? But then with coaches retiring, quitting, or getting fired every few years and the whole question of ownership of the team happening, the team went in to a deep downward spiral. They soon could not win. Random street gangs would tease the players and play keep away with the team ball. Sad times had fallen on San Francisco and I just lost interest. I'd still watch a game every now and again. When I got an HDTV I watched a lot more football because it was so cool to be able to see blades of grass on the field.

I'm excited to see how this season goes now. Since I have players from so many teams I think I will be watching a lot of football just to see how they do. Do I need to bench a player? Do I have any players on my team that I think might be terrorist sleeper agents? When exactly do dragons, orcs, gnomes, and elves come into this? So far its a lot more Football than Fantasy.

Well if you have any tips for what I should watch out for, let me know. I need to go read these scouting reports on my players. Wow, this guy pays way too much for his cell phone, but his girlfriend is cute. I wonder what the wife thinks about her.

{Originally posted to bizarreramblings.wordpress.com on September 7, 2010}
Posted by Unknown at 4:40 PM No comments:

I have always been a big fan of comics. Not comic books, but those little strips in the newspaper. Our local paper did not have any comics though. I would have to wait until I went to my grandparent's or my friend's house in other towns so I could dig though their old stacks of newspapers to dig out any comics I could find. They were magical to me. I would read them over and over.

A few years ago (ok, many years ago now) I found that people were posting their own comics online. Some looked very amateurish. Some were funny. Some artistic. Some vulgar. Some were all three. It was a new world. The standard newspaper comics seemed tame and boring.

To this day webcomics (as these online comics are known) have become an important part of my daily reading. Here are a few of my favorites:

Let me know what you think and let me know if you have any favorites.

{Originally posted to http://bizarreramblings.wordpress.com on August 17, 2010}
Posted by Unknown at 4:35 PM No comments:

What Do We Do Now?

Keith and The Girl's Smart Answers to Your Stupid Relationship Questions 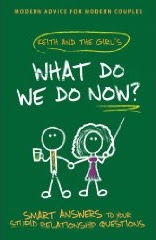 Finally, a modern relationship book for the modern relationship.
Keith and The Girl’s What Do We Do Now? is an R-rated, utterly honest Q&A book culled from the best and funniest questions posed by Keith and The Girl devotees. Perfect for everyone tired of boring and tried-and-not-so-true relationship advice.
I have been an avid listener of the Keith and the Girl podcast for about 5 years. In between news of Celebrity Antics & poignant discussions of modern society there have been many discussions of relationships. Keith & Chemda have collected many of the relationship questions they have been asked over the years and have written a book to help the masses that haven't spent 5 years with headphones plugged into their head.
The book is available at booksellers everywhere. Online, Large Megastores, small independant shops, and is available on request from shady characters in dark alleys.
Head over to http://www.keithandthegirl.com/book/ to take a look at a preview chapter.
Posted by Unknown at 10:03 AM No comments:

Geek Girl on the Street

As you might know, I am a big fan of Geek Girls. (I know, it's shocking.) And so I have to link you to my friend Kate's new website Geek Girl on the Street (http://geekgirlonthestreet.com/)

As the new destination on the internet for all things Geeky to Girly it is well worth your time to visit and read all of the humorous articles they are posting over there. From stories of Devo Hats to Bacon Dogs (of which I am still salivating at the thought) you never know what they are going to talk about next.
Posted by Unknown at 11:32 AM No comments:

What would you fly across the country for? teehee

Well while I would fly just to fly, I am going to say I would fly across the country for love, adventure, intrigue, comedy, food, if it were a Tuesday, to find something, to lose something, and (finally) to learn.

What's the kindest thing someone has ever done for you?

I had been laid off from Radio Shack and I got a call from a friend that I had helped with different projects, both radio & computer related. He gave me a phone number. He had arranged for an interview with a company to become a computer technician. It was the best thing that could have happened to me professionally and one of the biggest pushes forward in my life.

Posted by Unknown at 9:37 PM No comments:

Usually I will go with the sandwich. I am fairly (extremely) picky when it comes to Mexican food. I don't enjoy a hard taco shell or refried beans. I love spicy meat, cheese, and a flour tortilla.

Sandwiches are magical though. Each one is as different as a snowflake. And they have three of my favorite things if made right; meat, cheese, & mayo. (Also I am a fan of pickles but am not entirely sure why.)

Posted by Unknown at 9:31 PM No comments:

Ask me anything http://formspring.me/mikesmith916
Posted by Unknown at 7:02 PM No comments:

I have had great parts of a day. I have even had more than one great part of a day in one day. But I can't say I have had a perfect day. I guess it would have to be fairly warm but not too hot. Slight breeze enough to keep cool without your hair getting mussed. And then I would have to be doing some activity with friends. Could be anything. Trivia games, miniature golf, regular sized golf, camping, hiking, museums, movies, working on a project, I guess pretty much anything.

Posted by Unknown at 2:14 PM No comments:

Definitely a listener. I really do find peoples lives fascinating. So please, talk away.

Posted by Unknown at 2:00 PM No comments:

I've seen several people start using Formspring.me to have people ask them questions. So in an attempt to write more, I have signed up and even added a way to ask me questions right there on the side of my blog.
Posted by Unknown at 1:57 PM No comments:

Where You Can Find Me